I put the finishing touches to a full size Japanese Battalion for Rapid Fire! recently. They had been largely finished at the weekend, but life caught up with me and I was unable to complete the unit until now. This is the second Japanese Battalion I have completed as part of my ongoing Malaya/Singapore project. However, the other battalion is under strength and will need a few additions to bring it up to proper strength. This one, on the other hand, follows the OOBs as laid out by A. Michael Sayce in his Japanese World War II Scenarios booklet. The unit consists of:
Battalion HQ: CO + 2IC, 1 Bugler, 1 Standard Bearer, 1 Radioman, 4 Rifles (there should be 2 Rifles and 2 SMG, but I didn't have enough SMG figures, it makes no difference to the rules)
4 Infantry Companies, each with 2 50mm Mortars, 1 LMG team, 2 SMG and 6 Rifles 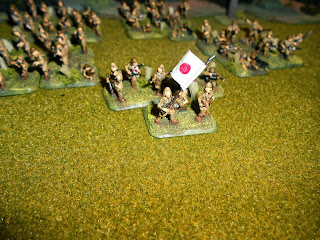 The nice thing about the Japanese is that I get to make flags, something that is very rare in the 20th Century. The BHQ flag was made with tin foil so I could have it flying in the attack! 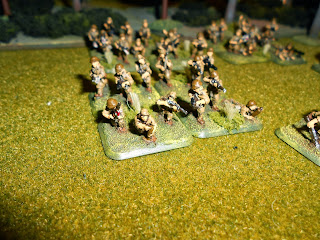 The unit is pretty big, with 57 figures in total, including 8 mortars! I pity the British units that will have to face that amount of fire-power. 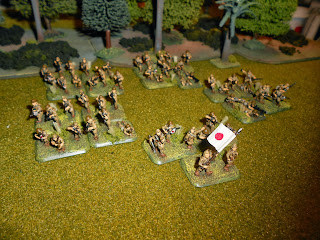 The battalion is augmented by support from four HMGs, the normal machine gun company consists of three HMGs, but I painted an extra one, just in case... The normal crew for a Rapid Fire! HMG is three, but in the Sayce OOBs this is increased to four and this means that the weapons will take more punishment before they are destroyed! 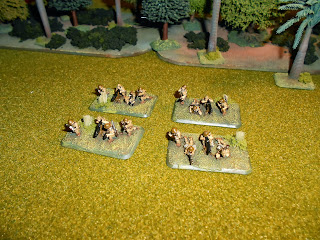 All the figures are by Command Decision, and these are probably pretty hard to get hold of in the UK now that Skytrex has folded... 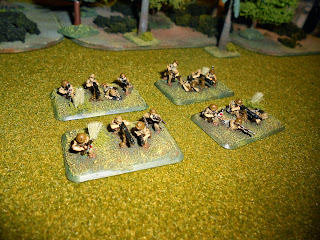 I still have another similar battalion of Japanese to finish off, plus some more tanks that are on their way from Peter Pig, along with a couple of British units and A/T guns before this project is totally finished and I can have a game, but the end is slowly coming in sight now...