I've read a lot in the past few years about the so-called 'Miracle Dip' technique. I have always baulked at the price of the Army Painter dip when it is really just wood varnish with a different label. But I was in town and shopping in Wilkinson the other day when I thought I'd have a go at the old miracle dip technique and picked up a this for less than a fiver: 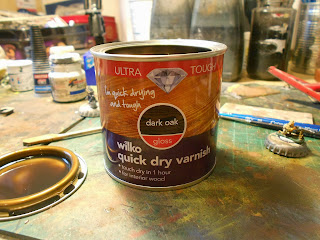 It was the darkest shade in the shop and at the same time I bought a load of cheap brushes to paint the stuff with rather than dipping the figure, it seemed to be less messy. I decided I'd use a Japanese HMG, one of several I have kicking about and I painted him in a white undercoat so that the colours would be bright and then painted him in basic block colours: 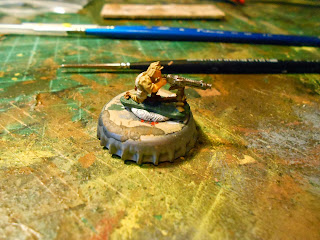 Then came the moment of truth. With brush in trembling hand I splurged the varnish all over the little fella. 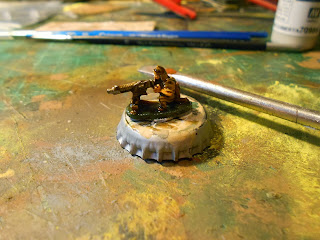 I'd read reports that people have left the figures overnight to dry, but within an hour or so he was dry enough to touch, so I spray varnished him to try to reduce the gloss of the varnish: 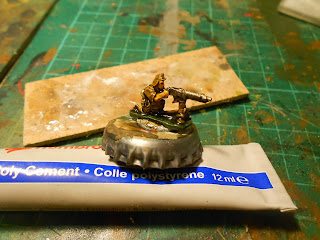 It could probably do with a few more sprays before it looks matt though. So, am I pleased with the results? Yes I am, it shows how quick an army can be painted up and look reasonably decent. I did notice that the varnish congeals in places, like some of the deeper recesses, but that may be fixed with painting later. I'm not sure how it would work with my current technique of basing the figures first then painting, as the varnish may bleed onto the finished base. But that is something to experiment with as well. I am kicking myself that I didn't do this with my Malaya campaign figures earlier...
Labels: Painting Product review Work in Progress