My modelling and gaming has taken a nosedive in the last week or so as I realised I have less than six weeks to write 12,000 words of sense about gas warfare, but even so I have managed to sneak in the occasional hour of dabbing some paint about.

This Panzer II was bought for me at Christmas by a friend and I am trying to make a dent in my to build pile, so this was top of the list. It's an ancient Tamiya DAK Panzer II. It comes with four infantry figures and a tank commander, who I won't be using as I want the tank to be buttoned up. The kit was simple enough to go together, only taking a couple of hours one evening, although it did remind me that there are much better kit manufacturers out there than Tamiya... 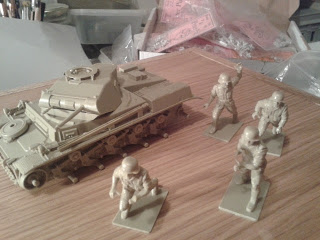 Then the painting began, slowly. I gave it a base coat of Vallejo German Grey to serve as an undercoat. I wanted it to have damaged areas that would show this paint underneath where scratches and bumps would occur, so I took this opportunity as my first attempt at using Humbrol's Maskol.

With the Maskol applied to the areas I wanted to be chipped and it was painted in Desert Yellow. This was then inkwashed with Chocolate Brown and dry brushed with Dark Sand. I've never painted a DAK vehicle before, either, so I was kind of thinking on my feet with the colour scheme. 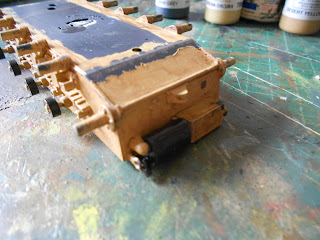 Then the Maskol is simply rubbed off to create a chipped effect.You can see it in this photo and the one above on the bend of the bottom of the hull and around the housing for the driving cog. 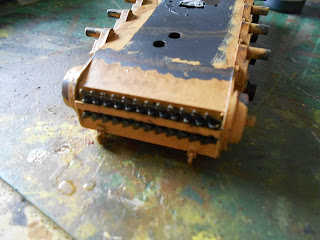 I didn't go wild with the chips as this was my first attempt, but I'm happy with the result I got. 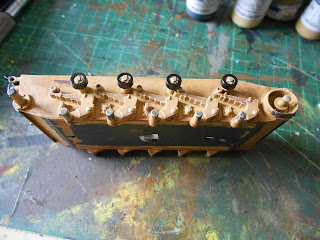 I'm happier with the turret and the areas of wear and tear showing through. 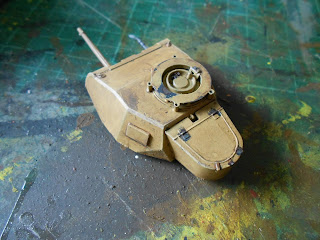 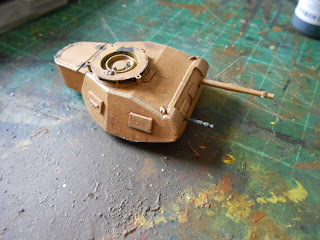 I have yet to start the top half of the hull and the wheels, they are both pretty big jobs, so it may wait for a while...

In keeping with a desert theme, I bought twenty of these palm trees off Ebay (they are actually for my forthcoming Malaysia campaign). They look a bit basic and ugly now, but I will paint them up and see how they turn out. It should be an easy task to turn them into something usable. 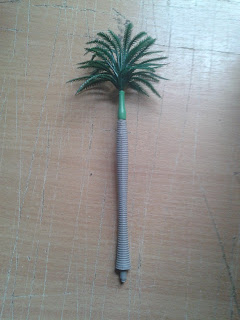