As part of the Pfalz build I bought a 1/48th scale pilot to mount on the base (when it arrives...), it's a resin piece from Masterclub, a company I had not heard of until I searched for pilot figures. I'm pretty pleased with how he turned out: 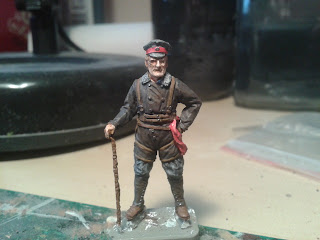 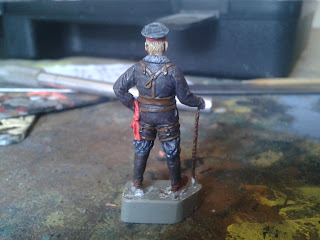 I painted the scarf red to match the colour scheme of the aircraft, which is now weathered and finished, and as I said, just waiting to be mounted on a wooden base (not a book on chemical warfare...): 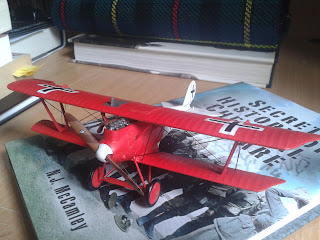 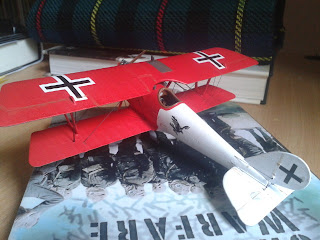 Also if you follow this blog you will already have seen I base all my vehicles for gaming with. There are several reasons that I do this, such as making storage safer (they don't knock against one another in the boxes), there is less damage to the vehicle if they are picked up by the base during games, it brings the vehicles up to the same height as the figures; which are also on bases and I think it makes the look more like gaming pieces, from an aesthetic point of view.

One other reason which I discovered recently was that I can add all the information to the base to make gaming easier. Rather than looking down a list of vehicles with different stats, now I can just turn the tank over and it is all there on the base: 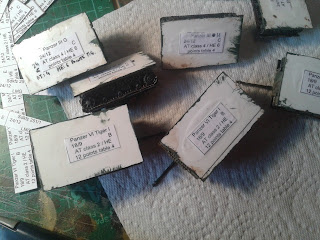 I originally just had the name of the vehicle on the base, but this still led to confusion as Ninjasaurus Rex doesn't know the differences in the marks of some AFVs. This way we have all the information he needs and he can stop asking me what kind of tank they are...
Labels: 1/48th 15mm Aircraft Model kits Painting Rapid Fire Tanks Work in Progress WW1 WW2