OK, before we start, here is the disclaimer: these were not inspired by Battlefront releasing their new Japanese ranges...

No, let me tell you a story. In 2008 I worked in Singapore (for a Unexploded Ordnance Demolition company as a surveyor, but that is ANOTHER story) and whilst I was there I did some research on the battles of Singapore and the Malaysian campaign in general. I knew nothing of the battles in the Far East then, and I only know a little bit more now, but I spent each weekend visiting the battlefields and museums of the island and trying to learn as much as I could.

When I returned to the UK I was inspired to recreate the campaign using Rapid Fire! and so I purchased some Japanese infantry, tanks and guns from Command Decision. As I said, this was five years ago and they have languished in their box until now. I was initially daunted by the prospect of painting a lot of infantry, but I pulled my socks up and cracked the whip until they were finished. I have enough figures for three battalions, this is the first battalion crossing a river (jungle haze provided by the hottest day of the year and a crappy phone camera...): 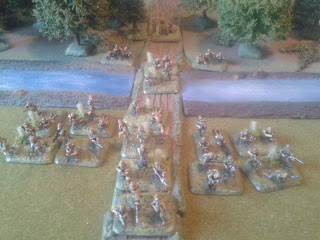 I had searched around for organisation charts for the Japanese in Rapid Fire! and came across the following organisation on the internet (I have since lost the address, having printed them out five years ago):

It seemed legitimate to me, there is a lot of fire power with those three mortars and large companies. 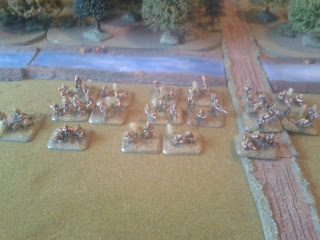 The problem is, I asked the question of Japanese organisations on the Oracle, AKA The Miniatures Page. I was told that I needed another rifle company in the Battalion and they should be 12 men, rather than 11. This extra company will be added in time, but I can argue that as the Japanese extended their supply lines to breaking point during the campaign it accounts for the fewer men in a company. 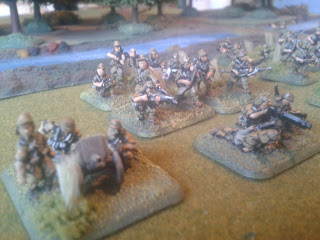 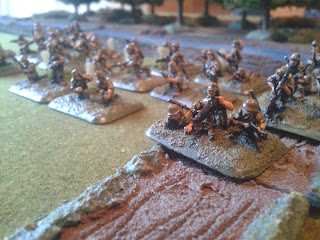 I also found a source for painting them (again, I have lost the internet address, unfortunately), which consited of the following Vallejo Paints: Uniform Base Coat: Chocolate Brown 872 highlighted with Green Ochre 914. Leather equipment and shoes: Beige Brown 875, Helmet: British Uniform 921 and Canvas Equipment: Stone Grey 884. You can highlight these by adding white, but I only did this to the helmets and it didn't make much difference overall. 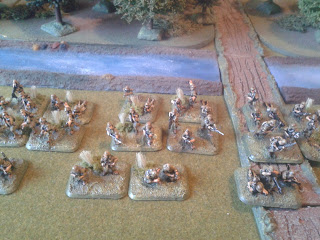 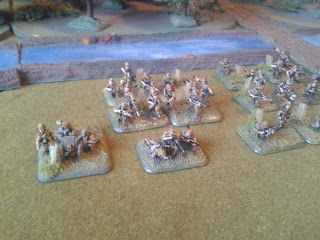 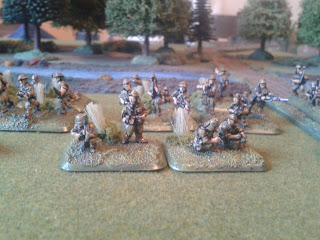 The thing I struggled with the most was the skin tone. Having also worked in Japan I knew vast differences in skin colour, like everywhere else, but I wanted something that didn't look 'European'. I settled on this combination, Humbrol Flesh for the base coat, highlighted with a mix of Green Ochre, White and Humbrol Flesh. It seemed to work and gave me a 'honey' like colour of sunburned soldiers. 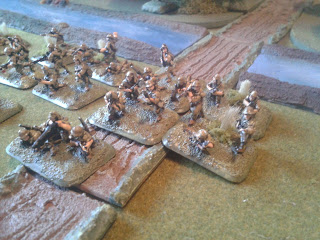 I also painted up three other 70mm Guns ready for the other battalions when they are finished, which may not be for a while yet. Here they are with their FOOs (I'm not sure of the Japanese for Forward Observation Officer): 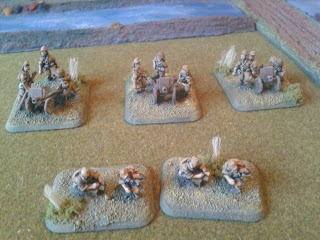 I have no opponents for them yet, except some Americans which I was once upon a time going to use for Normandy, they need rebasing and painting to a better standard so they won't be ready for a while. I have had my eye on Peter Pig's 8th Army Figures, so I can do the Malay campaign properly, but that is something to consider for the future.

Thanks to the people who compiled the painting guide and the organisation tables, whom ever you are!