Last year I lost my job and the same weekend I had to move out of the flat I was living in. All in all, it was all a bit of a crap time for me, so to cheer myself up I bought a 1/48th Scale Pfalz DIII by Eduard. It's described on the box as a weekend kit, but has taken nearly a year for me to build...

Just recently I bought and built a 1/72nd SE5a as a tester, as I knew I was going to rig this kit, which is one of the reasons it has taken me so long to get finished. I was just scared of actually rigging the model, but now I have done some prep and a year of research, I'm ready to finish it off. Here are a few pictures of it in progress. 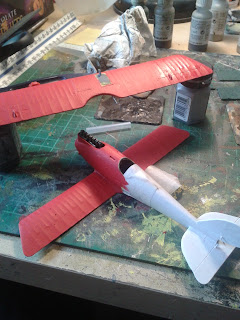 Stupidly I had undercoated it in grey, so not only did the white need a few coats, before it looked white, but the red needed another undercoat of yellow, but after a few days of coating and re-coating, I got it the colour I wanted... 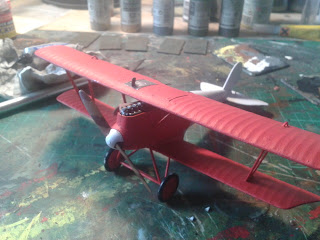 The colour scheme is of Ltn Hans Műller who flew with Jasta 18 in 1918 and ended the war with 12 victories. 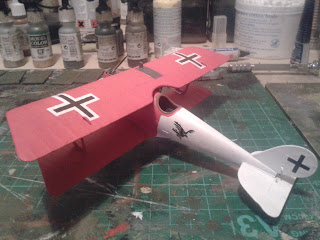 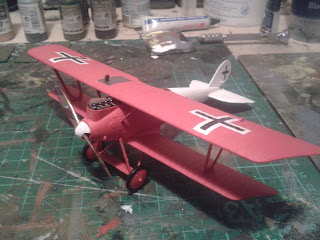 I like Pfalz aircraft as they are the 'unknowns' amongst the more famous Fokkers and Albatri and I always try to support the underdog. Anyway, at the model still needs weathering, rigging and basing, so check back soon for the finished thing! Thanks for looking!
Labels: 1/48th Aircraft Model kits Work in Progress WW1