This is the final part of the build, you can read the previous parts here: PART ONE, PART TWO and PART THREE.

Now the majority of the model is finished I started the painting phase. I began with an undercoat of black, I always use black, that way it covers anything I miss... Then I had a look around on the internet for colours of town halls.
It seems that there is a whole rake of colour schemes I could choose from. For example, here is a selection from a Google image search for German Town Halls:

I went for subtle.

With the ground floor I decided on a pale yellow for the walls with an earthy brown for the floor tiles. This theme would be repeated on the floor supports and decoration in the window recesses: 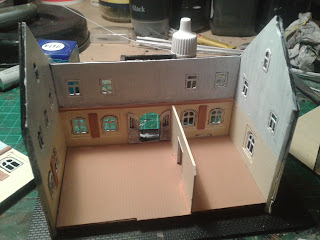 In recent years I have painted lots and lots of ruins for city fighting, so to paint something that was undamaged was a relatively new thing for me. As I painted it took me back to my days in Dublin when I was working at weekends as a painter and decorator with Tommy the Painter. I was saving up for a six week road trip across America and needed the extra cash to pay my rent. Tommy would spend the time telling me about the fairground ride he was planning to build in Galway called the Beetle Bug. Whether the Beetle Bug ever got passed health and safety stipulations and was finally built, I'll never know. It probably didn't.

I digress.I painted the interior and gave everything an appropriate inkwash just to give the walls the look of having fallen into disuse: 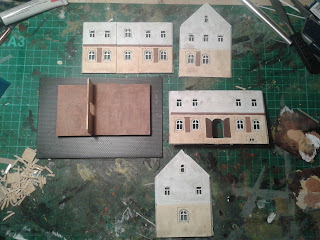 I glued the walls into position and painted up the outside. It was at this point that I realised I should have paid more attention to the dry fitting as some parts of the walls didn't fit perfectly. A problem of rebuilding a second hand model, I guess... I added more rubble where the roof had fallen on the street below, which I painted and ink-washed and painted the tower in a verdigris green that I mixed from light blue and intermediate green: 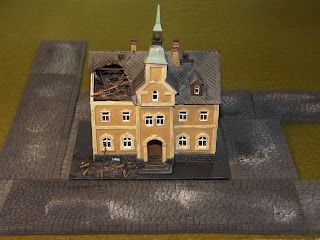 You may notice that the tower is slightly off centre and has an overhang. This is because when I put it all together the roof was slightly off and it was unfortunately something I hadn't realised when I was dry fitting the building. I made it into a feature by adding a small sliver of plasticard along the bottom of the overhang so it looked like it was a deliberate overhanging tower! Here it the model in its constituent parts: 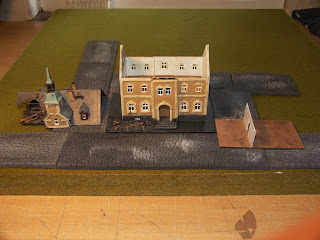 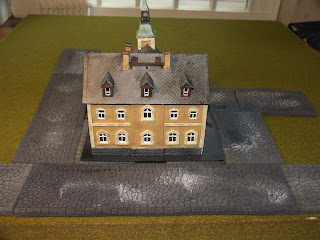 One of the side walls: 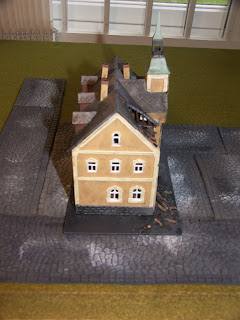 And here it is with four Panzer Threes passing by (probably on their way out for a picnic) to give you some scale: 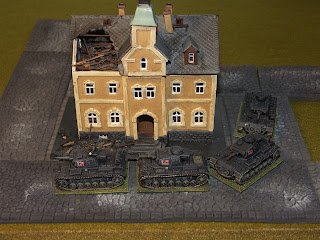 This has been an interesting project and as I haven't properly scratch built any scenery for nearly twenty years I learned a lot as I went along, so that was also enjoyable. If I was starting this again there are a few things I'd look out for, like being more careful during dry fittings, but overall I am pleased with the end result and the experience! I have a large factory building that I will tackle at some point soon, so keep an eye out for that on this blog! Thanks for reading!!
Labels: 15mm Painting Rapid Fire scratch-building Square Bashing Terrain Tutorial Work in Progress WW2