Welcome to part three of this ongoing German town hall build. You can catch up here with PART ONE and PART TWO. In the last part I'd got most of the interior built so now it was time to turn to the roof. I wanted to make the building seem as though it had involved in action, maybe a heavy weapon positioned in an upper room that had been taken out by some heavy artillery. So I figured this would be on the front of the building and cut out a corner of the roof and cleaned it up with a file.
I filed down the tiles that I'd cut in half with the knife, to make it look more like tiles that had fallen off. You can also see in the photo that I have added the top of the front tower. I decided to do this as it would make it easier to access the floor spaces below. It needs the top of the tower adding, but that I can do later. 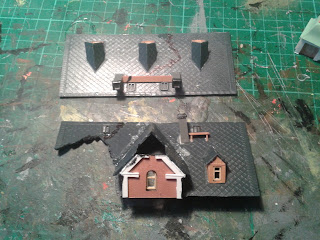 As there is a hole in the roof it means the attic rooms will be visible. For this I cut another piece of plasticard for the attic floor and glued roof beam ribs on it. 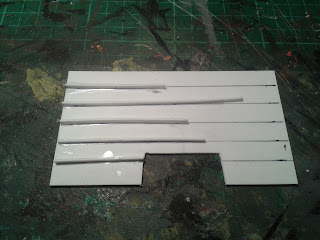 Then I took a thin piece of plasticard with floor boards embossed and cut some of them shorter to reveal the beams and make it look like explosive damage had blown the boards about. 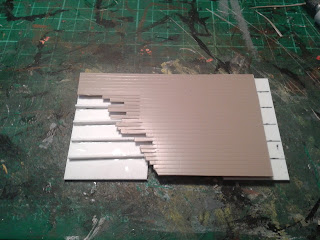 A quick dry fit shows that the building is taking shape. This is pretty rough and I need to do a lot of work on making the attic floor fit and other bits and pieces, but we're getting there even if slowly! 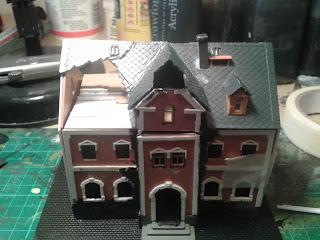 The roof still looked a little bare so it needed some more detailing. I wanted to show the roof beams sticking out under the tiles, on the upper part of the roof this was an easy thing to do. I cut some lengths of plasticard and glued them to the roof. This then looks like they have been smashed in the force of whatever hit the roof. 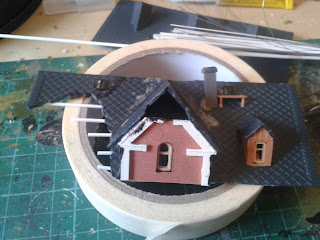 I was facing a problem with the wall though. If I put roof beams stuck out of the wall it would stop me being able to lift the roof off easily. Then I had a brainwave. If I glue the roof beams to the attic floor as though they have collapsed that solves the problem, so I did! 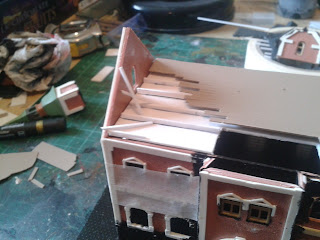 To this, I added some sand and railway modellers ballast, to represent all the smashed up pieces of tiles and the like: 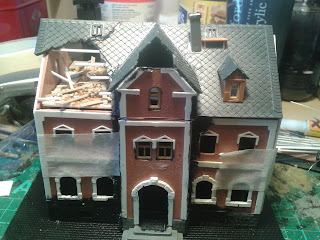 Then I went even further and added a load of scattered floor boards to the attic floor. I am going to add some to the base as well, where they would have fallen. But that phase is still quite a while off yet: 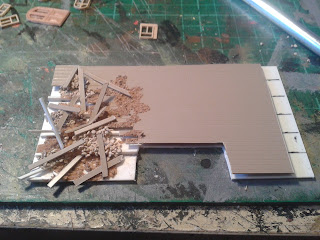 As the attic detail was drying I started work on the window frames. These are quite nice so I didn't want to waste them, but they required trimming down. The recesses in the windows are where the extra bits hold the frame to the wall. Each one had to have this excess cut off and this took some time: 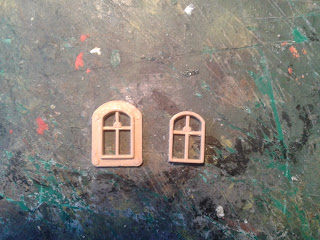 Then each one was glued back into their original positions. The only problem with this stage was that the windows were no longer recessed, but they still looked OK to me: 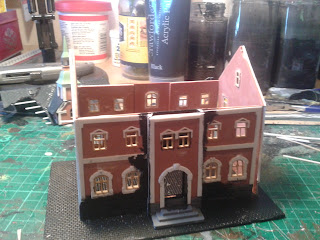 And here it is, dry fitted and with the tower attached it's almost finished. 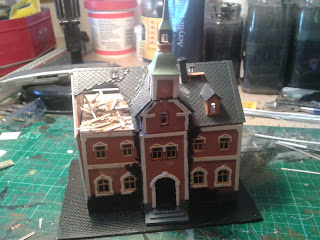 All that remains to do is some more detailing of fallen rubble, painting and fixing the roof into one piece and then finally painting the whole thing, so we're all downhill from here!! Thanks for reading and look out for the final part of this build soon!!
Labels: 15mm Rapid Fire scratch-building Terrain Tutorial Work in Progress WW2