Welcome to the second part of this ongoing German town hall build. You can catch up by reading the previous part HERE. Previously I was left with the puzzle of window recesses and how to deal with them. Rather than build out the walls with plasticard I decided to fill in the recesses with Milliput. I've had some of this kicking about for ages so I might as well put it to some use. In the first instance I pushed out the window trims as they needed cleaning up.
Then filled in the recesses with the Milliput. Here are the windows recesses filled in and left to dry: 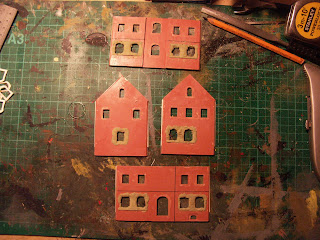 As the Milliput dried I cleaned up the window trims as they were covered in glue and I wanted them to have a snug fit. After this I cut the ground floor (1st floor, if you're from the other side of the Atlantic...) to shape so that it fitted snugly into the recess on the rear wall. Here is the ground floor dry fitted: 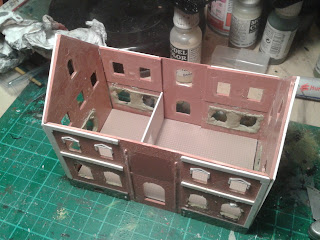 The following day I found that the Milliput hadn't dried properly, so after I'd stopped crying, I cleaned it all off from around the windows and texted Ninjasaurus Rex about it. I had only filled in the windows in the first place as I knew he'd point them out to me at some point and mock me for it. I mentioned to him that the Milliput hadn't dried and he said 'I wouldn't have bothered in the first place and found some photo reference that backed up my laziness.' Now he tells me...

Anyway, I never found any photo reference for this, but I decided to put some embossed plasticard in the window recesses as though it was some kind of decoration. The window frames were then glued back in position: 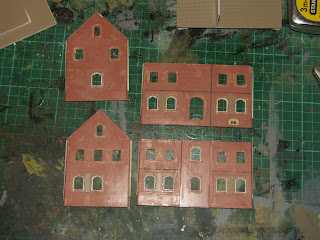 Next stage was dealing with the upper floor. This was carried out exactly as with the lower floor, but it didn't need building up to height and only required one piece of plasticard with an embossed piece stuck on top that looks like floorboards: 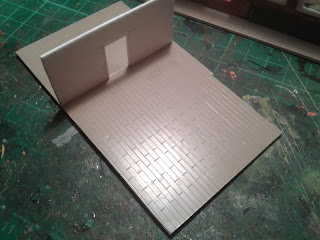 Here it is in place, all dry fitted. 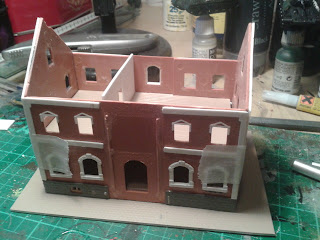 To hold the 1st floor in place I glued batons across the length of the building at the right height. In a superb twist of fate amongst some other bits and pieces Ninjasaurus had dumped on me were some half rounded batons that were perfect for the job and looked like the coving at the top of interior walls: 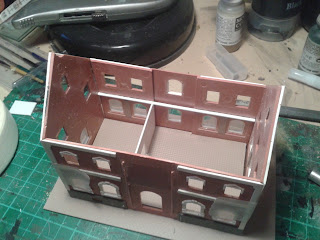 The 1st floor will be removable so that I can access the bottom floor during a game. I thought about building a staircase, but this would reduce the amount of figures I could get into the building. I wanted the maximum amount of figures in there so space is at a premium and I am happy to forgo a bit of realism (that would not be seen anyway...). Here is the building with some German Panzer Grenadiers occupying it, as you can see I can quite happily get six Battlefront bases on each floor: 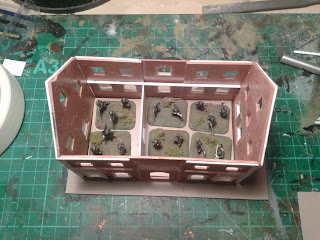 That's enough for this post, I'm nearly ready to start on the roof which will be the most challenging but rewarding part of this build. There'll be more when I do more, but thanks for looking so far!
Labels: 15mm Rapid Fire scratch-building Terrain Tutorial Work in Progress WW2