This kit has been sitting around in my to build pile for a while now, it was a gift for my war chest by Ninjasaurus Rex, so I thought I'd have a crack at it. I usually make ruins which are quite easy and Ninjasaurus thinks I should challenge myself, so whom am I to argue?


The kit is a HO scale railway model building of a German Town Hall or similar public building by Faller (I think) and it will fit nicely within an eastern German or western Russian town. As is usual with second hand railway model buildings it appeared that it had been put together by a chimp with particularly large sausage fingers. So a little patience and a craft knife was needed. Here it is in its constituent parts: 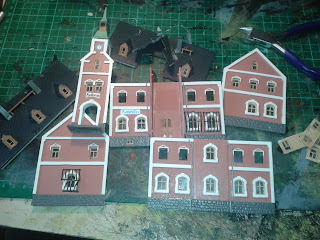 I cleaned up all the blobs of glue and removed the window frames (which will be cut to size later), took off all the extra bits like drain pipes and guttering and generally cleaned the thing up. I cut a base of plasticard for it to stand on on the table top. This is how it looks without the roof, I used sellotape to hold it together for now: 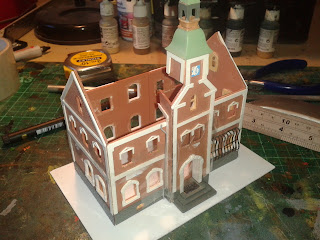 Then I turned my attention to the interior. The model had no inside detail as it was only intended to be seen from outside, therefore in the first instance the building needed a floor. This needed to be scratch built and raised by about 5mm to match the entranceway if I was to use it to put figures in during a game. I cut a piece of plasticard to the correct dimensions of the inside walls and added a few layers of off cuts of plasticard struts to increase the level to the required height. 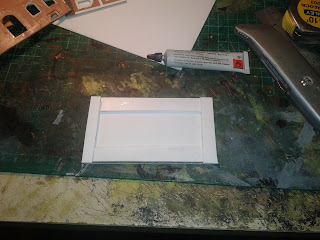 As that dried I cut out a piece of embossed plasticard to go on the base. This is embossed with brick work to make it look like a pavement. 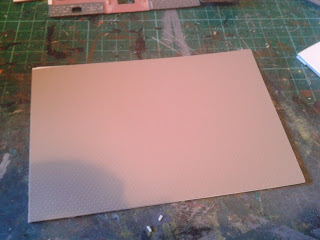 This was then trimmed down to size and generally cleaned up and I returned to the interior. I cut a rectangle of embossed plasticard that looks like the kind of large floor tiles you get in public type buildings. Upstairs will probably have varnished floor boards, but we will see how that turns out...

Anyway, I then cut the floor surface piece of plasticard in half where I wanted the interior wall to go. This wall will have a dual purpose of separating the interior into two rooms but also providing a support for the upper floor that I will deal with later. I also checked at this point to see if I could actually get figures in the spaces between the interior walls. With a sigh of relief, they fitted! So on the longer piece of plasticard I cut out the thin space where the wall is going to sit and glued the two halves together thus: 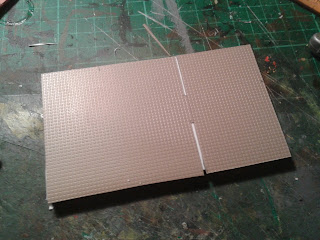 And here is the wall in place. This is made from a piece of plasticard with the door cut out and the door frames added from a U shaped rod of plasticard that Ninjasaurus gifted me. It's amazing the amount of stuff he has dumped on me in the hope that I actually get around to building things out of it... 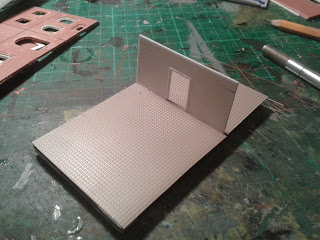 Here is the interior wall up against the front wall of the building. The black lines show where the first floor will go (second floor to our American cousins...). You'll notice I've also cut the tower off, this will be made as part of the roof so won't impede access when I'm using the house in a game. 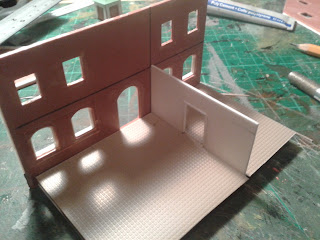 The next thing I am currently puzzling is what to do with the recesses that are around the windows. These are a feature of the original kit to aid the cack handed modeller when putting the window frames in but they need filling in for my use. I may use plasticard to clad the interior in the same way that Ninjasaurus Rex did on his Chechen house, but the amount of windows is really off putting, I'd have to cut 22 holes in the plasticard and then deck them out with window sills and the like, which may be a step too far for my delicate constitution...

This is as far as I have got as I have to think about the window recesses and do some reading for my dissertation. This will be updated as I continue the build but I hope you enjoyed it so far and thanks for reading!
Labels: 15mm Rapid Fire scratch-building Terrain Tutorial Work in Progress WW2