"Welcome back to the Nurgle Bowl Championships after the delay caused by 15,000 Lowdown Rats Goblin fans turning up with tickets to the wrong match and starting a riot outside the stadium. This is Dick Brooking speaking and I'm here with Bob Motson to give you the low down on the following match between the Dwarf Giants and the Gouged Eye. These teams are old rivals, hey Bob?"

"That's right Dick, ancient rivals and this match-up has got some history of violence, so this should prove to be an interesting game!"

"You can say that again, we have the unmovable force that is the Dwarf against the wily and downright nasty Orc. Both teams can easily hold their own so it could be anyone's game. Not one I'd like to have put a 1,000 Gold Crown wager on"

"It looks like the teams are finally on the pitch for the kick off and the Gouged Eye lost the toss so it's up to Trok Elfsplitter to boot the ball down the pitch!" 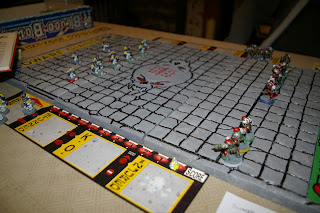 "That's a good kick there from the long-legged Orc, but the Giants are bearing down on the Orc line, this looks like it will get rough! I'd hate to be standing where they are right now!" 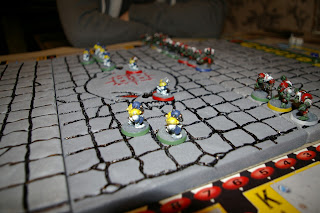 "That's right Dick, the Dwarf Blitzer Kurt Livingrock has possession of the ball, it'll be difficult for any Orc to take that off him. He's caused four fatalities and that's just in his last match, never mind this season!" 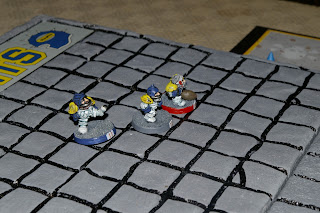 "A Dwarf blocker is a powerful tool, Bob, two Orcs eating Astrogranite for one Dwarf is the way they like to play!" 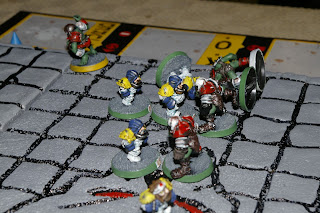 "It would certainly appear so with the carnage in midfield! Orcs are dropping like ninepins!" 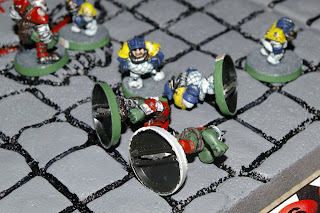 "Oof, the violence is mounting and it looks like Grimwold Grimbreath and Varag Ghoul-Chewer have an old grudge to settle, I don't think this evens the score though!" 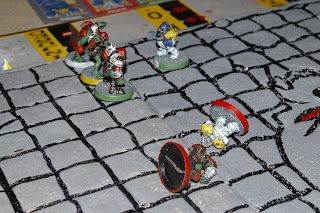 "Those two have been beating the tar out of each other for a while now, Bob, I'd hate to put on a bet which one will still be standing and who'll be taken off the pitch covered in blood!" 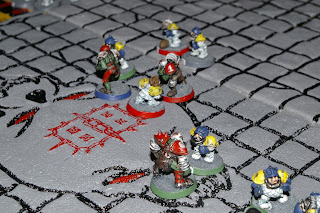 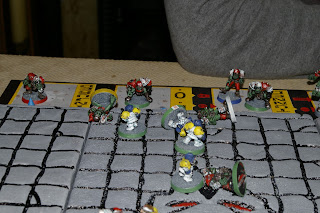 "The Blocker Rockrider Howitzer looks like he's facing some tough opposition from three Orcs, Blocker Urfrik Skullhack, Catcher Izzy the Frog and Thrower Harg Vainkill! This is a gang up of massive proportions but probably the only way the Orcs will get Howitzer to bite the Astrogranite!" 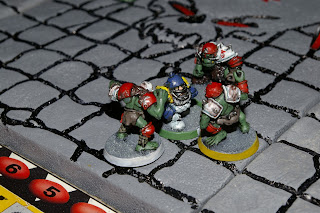 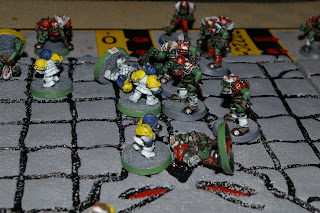 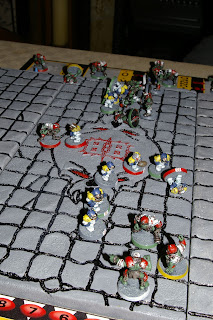 "Dick, things are really hotting up down there as Livingrock makes a dash for the end zone and you know as well as I do that Dwarves don't dash so well!" 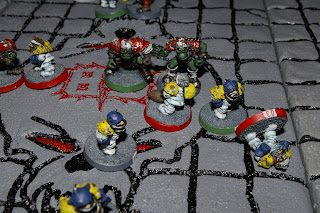 "The Orc defence have made pebbles of Livingrock and gained possession, what a turn about! This is the big one, the Catcher Izzy the Frog is in a position to receive from the Lineman K K Klannerman, but can he make the toss?" 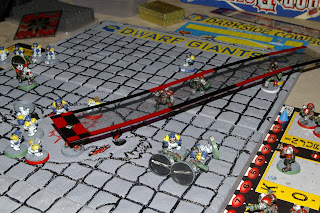 "Jim,you know as well as I do, Orcs don't like a throwing game and this one is no different. Izzy has failed to make a connection in his last three matches and it doesn't look like his luck is changing any time soon. He's fumbled the ball, but luckily for the Orcs it's actually closer to the Dwarf endzone!" 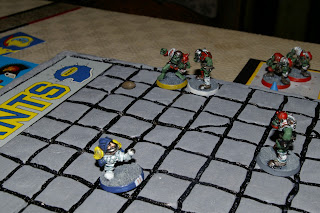 "A quick bit of manoeuvring and Izzy has the ball and slams it on that painted Astrogranite! The crowd in the Orc end is erupting, I can see Snotlings being thrown about like confetti!" 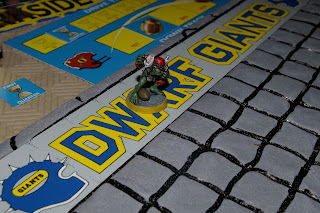 "Bob, that's one nil to the Eye, the Giants will not take this lying down I'm sure! But we'll see after these important messages from our sponsors!"

"OK folks, the post touchdown reorganisation has finished and the Dwarf line up is right back in the action, they are taking no prisoners this time. There's a lot at stake!" 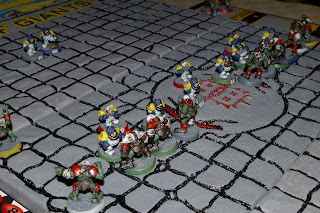 "There are no niceties between these teams, this is going to get messy real quick, Dick!" 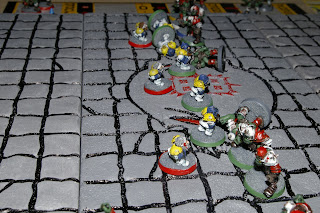 "Oof!! And it does, Bob! There's bodies sprawled across the Astrogranite! That's a head stomping delight for the fans!"

"It's what they pay their ticket Crowns for, Dick!" 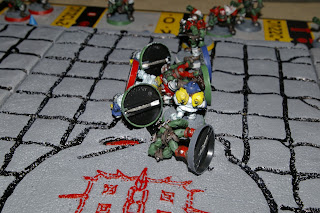 "The Giants are taking no chances this time, Bob, their Kicker, Flintforge Hammer, hoofs the ball down the pitch to Blitzer Kurt Livingrock already waiting near the endzone!" 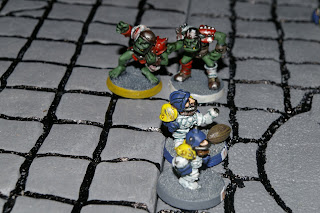 "Livingrock has missed the ball! That's going to cost the Giants!"

"Especially as he wasn't counting on the speed of a determined Orc and Lineman Gurk Halftoad brings Livingrock down with a heroic tackle!" 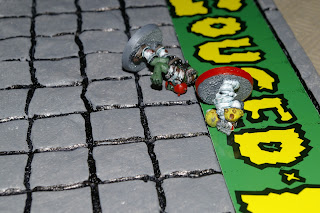 "Things are getting desperate for the Orcs now, with half the team off the pitch injured, Bob! Only a miracle will save the The Gouged Eye! It's a pity they beat up most of the magicians at the College of Magic, otherwise they may have had some sorely needed luck!" 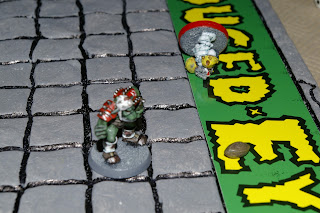 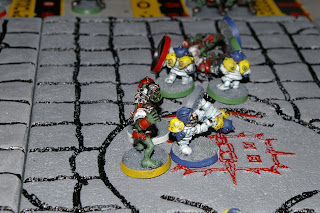 "It looks like that miracle is getting further away, Dick, those casualties are mouting!" 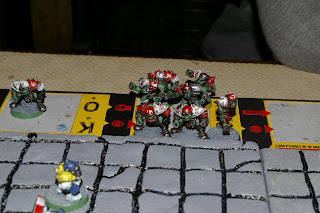 "Gurk Halftoad is known for his quick thinking and he's showing it here, looks like he's lining up for a punt!" 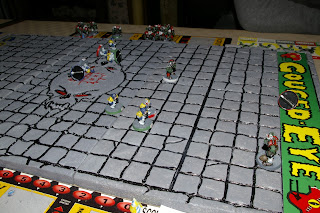 "He'd better hurry up if he's going to do anything, he has some pretty angry Dwarves bearing down on him!" 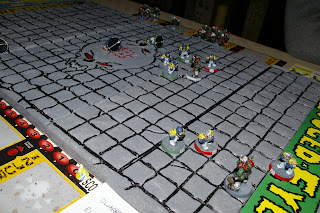 "BAM! There's the kick, all the way down the pitch and that ball looks an awful long way away from the Gouged Eye's endzone all of a sudden! Tricksy Orc tactics!" 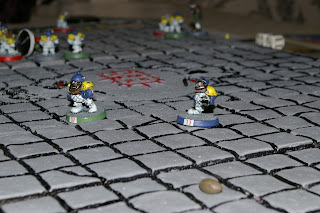 "Dwarves don't like being beaten and won't take this lying down, but is looks like the poor Catcher Harg Vainkill will though!" 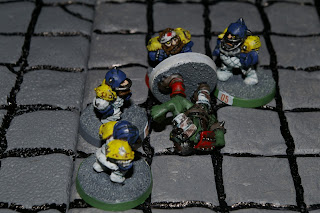 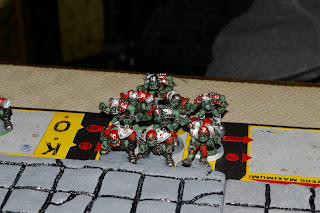 "That's true Dick, the pitch has almost been cleared of Gouged Eye now, every Dwarf not holding the ball is making a beeline for the last Orc survivor, it looks like poor old Gort Skullhack is going to take a beating! To survive this he's gonna need some of the College of Magic's help, I bet he's regretting biting the fingers off that Mage now!" 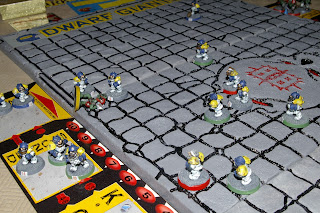 "Bad news Dick, the game has to be stopped because of ugly crowd violence spilling onto the pitch prompted by a lightening bolt duel between two wizards in the opposing stands, but not before the Giants got an equalizer. Another fine day for the sport of Kings, an exciting match with plenty of violence and bloodshed and even a couple of touchdowns scored!"

"Yes indeed Bob, that's why they call it Blood Bowl! We'll be back next week, sports fans, if the stadium is still standing!"