In a previous post I showed you how I went about building a ruined village for Square Bashing. In this post I will continue this theme and show you how I built a similar terrain piece of a shattered wooded area.

To many people's mind this is one of the classic images of the First World War. The following pictures demonstrate exactly what I mean and are of Chateau Wood near Ypres. The first one is probably one of the most famous (if not over used) images of the Great War and is probably instantly recognisable to most people. The second shows the same wood, but in another area. The trees were splintered from heavy shelling and I wanted to replicate that in miniature. 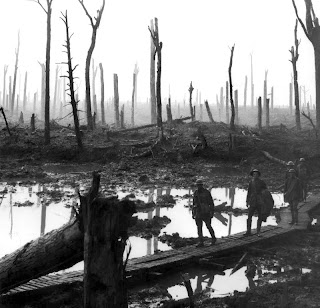 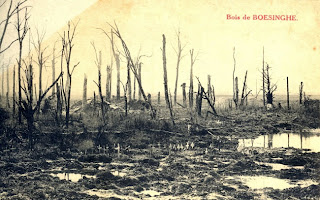 Because Square Bashing is played on one foot squares, the terrain piece was built on a one foot square vinyl tile bought from any good DIY shop. These are sticky backed so they can be stuck on a similar sized polystyrene square. I used vinyl as it has a decent amount of strength and isn't prone to curling up at the edges. The first thing to do was apply a thick spread of Tetrion over the tile and push some real twigs I had picked up in the garden into the filler as the shattered tree stumps. These were also fixed in place with some PVA glue, just to be sure. Craters from shells were created by pushing my finger into the still wet Tetrion and the whole thing was left to dry: 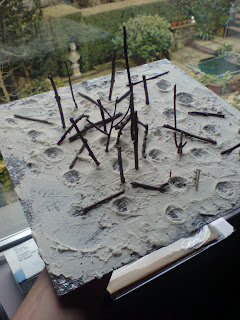 The next step was painting the wood and this was a very simple process. A initial spray of brown was followed up with lots of heavy dry-brushing and some ink washing to build up the shades of mud. Finally I sprayed a thin line of green (which was drybrushed in yellow)  around the edge to break up the straight lines of the vinyl tile when it was on the table. 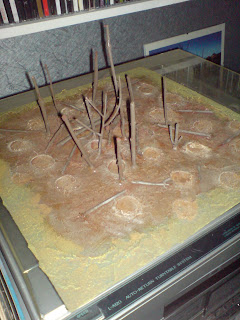 Here, British forces are advancing through the wood tile during a game. 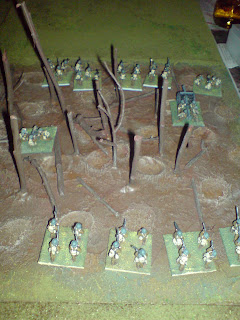 Another simple idea that works pretty effectively and is quite evocative of the Great War.
Labels: 15mm Square Bashing Terrain WW1