Mark at The Ramshackle Fort asked me if I'd do a work in progress post as we were discussing the skin tones for Dark Elves. I had asked for his input for flesh tones because I am currently working on the Darkside Cowboys team for Blood Bowl. In photos in the Star Players Handbook the Dark Elves have a bluish tinge to their skin, so this is my attempt at re-creating that. I decided on using a Blitzer figure for the tester as he had the most skin exposed.

I painted all the uniforms of the team first, leaving the skin for last, you can see the rest of the team in the background have yellow helmets, but this guy isn't wearing one. Like all my figures he has a black undercoat ready for the skin: 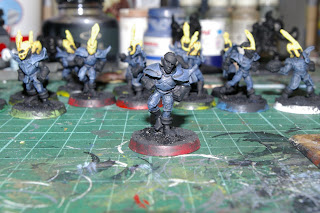 The next stage was to paint on the basic flesh tone, this is Humbrol acrylic, and I gave him a rough covering of the skin: 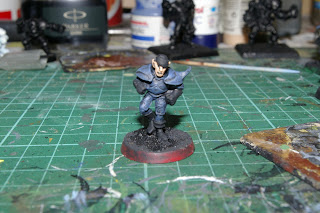 Next step was to paint a mix of white (Vallejo) and flesh (Humbrol) over the prominent areas, just to give some definition. I also painted the bandage around his head. 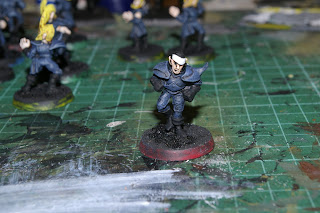 This bit was uncharted territory for me; a blue wash (watered down Humbrol French Blue) over the skin! What was I thinking? But it was too late to go back now... 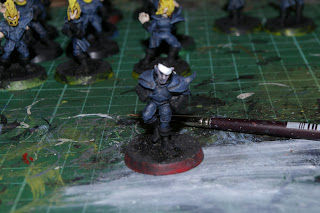 To my pleasant surprise, it actually turned out OK after I repainted a really lightened mix of flesh and white over the prominent bits of the face: 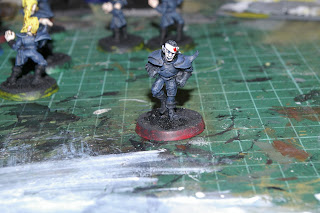 Well, that's it, he obviously needs the base finishing off and some details adding (I'm not sure what to do with the eyes, for instance), along with damage to the armour. This being the first ever Dark Elf I have painted I'm quite happy with it! Tune in soon for the full finished team!
Labels: 28mm Blood Bowl Dark Elves Fantasy Painting Work in Progress