In this post I'm going to show you how I built a village ruin. I play World War One in15mm with the Square Bashing rules by Peter Pig. Therefore this village is built on a one foot square vinyl tile for a modular gaming board, as Square Bashing uses one foot squares as its basic measuring system. The tiles are two vinyl tiles glued on either side of a polystyrene square to give them some depth and strength. On top of this the village is built. It's a heavily damaged village as the game is set in World War One, but I can't see why a similar approach wouldn't work with other periods. I was going for the brick smears that were all that remained of some French and Belgium villages after heavy fighting, for instance Guillemont, which was fought over during the Somme campaign. 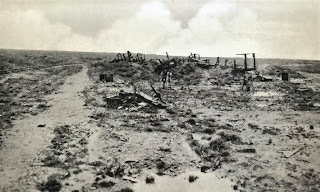 So with this in mind I purchased a set of ruined walls, but I'm afraid I forget who the manufactured them, (my bad memory may become a feature of this blog...). These were glued down in basic shapes of house footprints being careful to make sure that there was enough room for figures to be placed between the walls: 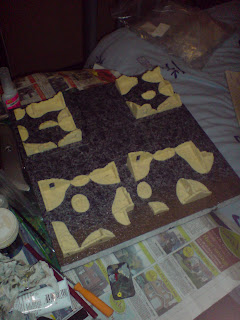 The next stage was applying Tetrion or a similar filler to smooth off the joins between the bottom of the walls and the road, this was also used to bring the level of the building's interiors up a bit and left to dry for at least twenty four hours: 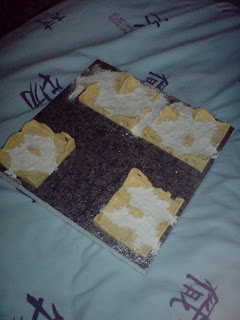 With some thinned down PVA glue and sand I gave the tile some texture, mostly in the footprint of the buildings. Over this cat litter and railway modelling ballast was also scattered to give an impression of larger shattered masonry blocks. This was over sprayed with a very thinned down PVA to seal (especially the absorbent cat litter!) and left to dry again for at least twenty four hours: 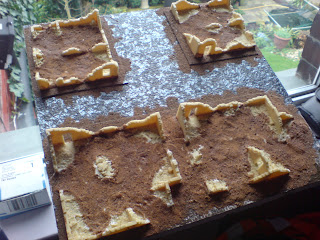 The final stage was painting and this consisted of several heavy dry brushes of grey and red brick with some details picked out on the walls and various parts of the houses: 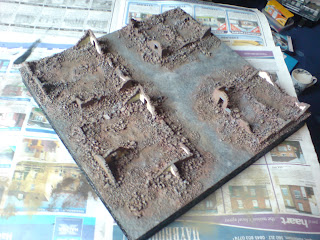 And here it is in game! With the help of a tank the British have just captured the previously enemy held ruined village and are threatening the Bosche artillery! 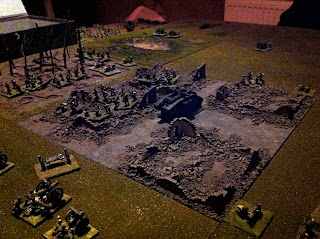 Overall this was a quite easy little project and I am just trying to find time to make a few more to put together for a larger town or city.
Labels: 15mm Square Bashing Terrain WW1